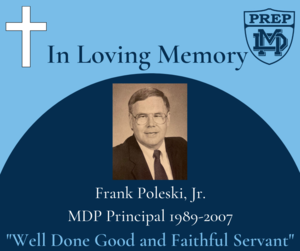 Mater Dei faculty, staff and alumni were devastated to hear the news of their former principal, Frank Poleski's passing. Mr. Poleski was a Seraph at heart and was passionate about our school, his students, and staff members. His legacy is seen in MD Alumni and their continued commitment to Mater Dei Prep.
RED BANK — Frank Poleski Jr., 74, of Allegheny Township, Penn. — who was a teacher and coach for many years at Red Bank Catholic High School and as principal at Mater Dei High School — passed away Friday, March 18, 2022, in his home.

Born Aug. 14, 1947, in Harrison Township, he was the son of the late Frank Poleski Sr. and Jennie (Szost) Poleski, of East Vandergrift.

A graduate of Kiski Area Senior High School, Class of 1965, he was a member of the undefeated Cavaliers football team, champions of the 1964 Foothills Conference. He went on to play football and graduate with a bachelor's degree in political science from the University of Pennsylvania, Philadelphia. From 1969 to 1971, Mr. Poleski served in the Army Signal Corps and was stationed at Highlands Army Defense Site in Highlands, N.J.

After leaving the Army, Mr. Poleski remained in New Jersey to pursue a career in education, earning a master's degree in school administration from Monmouth College, West Long Branch, N.J. For 36 years, he dedicated his career to Catholic secondary schools in the Diocese of Trenton and Archdiocese of Newark.

He started his career as a social studies teacher and football and wrestling coach in 1971 at Red Bank Catholic High School, Red Bank, N.J. He then became assistant principal at RBC in 1975.

In 1980, Mr. Poleski became assistant principal and business administrator at Union Catholic Regional High School, Scotch Plains, N.J. Having been very successful at Union Catholic, he was named principal of Mater Dei High School, Middletown, N.J., in 1989. He was recognized by the Diocese of Trenton for outstanding leadership in Catholic education in May 2003. After 18 years at Mater Dei, he retired in 2007.

At his request, there will be no public viewing. Family and friends are invited to attend a Mass of Christian Burial celebrated with the Rev. Michael Sciberras at 11:30 a.m. Tuesday, March 22, 2022, at St. Gertrude Church. At the conclusion of the Mass, military honors will be accorded by the Vandergrift Veterans Honor Guard. Private burial will follow at Greenwood Memorial Park, Lower Burrell.

Arrangements have been entrusted to Brady-Curran Funeral Home and Cremation Services, Vandergrift, Penn. In lieu of flowers, donations may be made to the American Cancer Society, 320 Bilmar Drive, Pittsburgh, Penn. 15205, www.cancer.org.

To send an online condolence to the family, please visit curranfuneralhome.com.