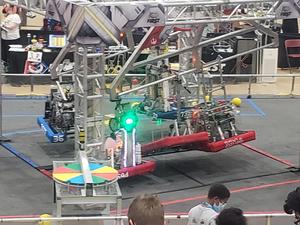 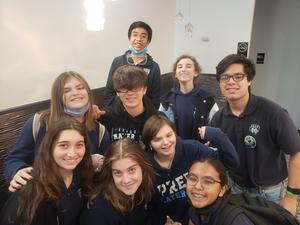 Team Mater Dei-Namics' one-of-a-kind, student-designed and built robot named Bob, was put to the test in 12 qualification matches that took place over two days. They had a rough start as minor design flaws and errors were caused by an inexperienced Drive Team that plagued the novice group.

Not to be deterred, Mater Dei-Namics' students continued to work together to make repairs and improvements. They sought the advice of experts from Hall of Fame teams and engineers. As a result, the students managed to redesign and rebuild significant components on the fly between matches.

The Mater Dei-Namics Drive Team found their groove and were able to work and carry out complex strategies devised with their alliance partners that led to several match wins.

Mater Dei Prep’s team caught the eyes of the judges and officials, who are each professionals from significant firms. They put it simply, “This rookie team has a practical 'trial and error' approach to their mechanical and team-building skills. These kids get it. They are perfect examples of the guiding principles of FIRST Robotics and the engineering process in action. They adapted to ever-changing conditions, improving every match.”

This exciting weekend ended with the presentation of the Rookie All-Star Award to Team Mater Dei-Namics.  This award celebrates the rookie team exemplifying a young, but strong partnership effort, as well as implementing the mission of FIRST to inspire students to learn more about science and technology.

What is next for Team Mater Dei-Namics? They are heading back to their Mater Dei Prep MakerSpace, improving on the design process, and rebuilding their intake and lifting mechanism. The robotics class is adding an active winch that should allow them to score upper hang bars during the end game.

Mater Dei Prep is proud that Team Mater Dei-Namics is now “The Team to Watch” according to FIRST Robotics. Come and see them at the Mid-Atlantic District Event April 1-3 at Montgomery HS in Skillman New Jersey. They are in the running to go to the District Championship April 7th - April 9th and onto Houston, Texas for the World Championship on April 20th.