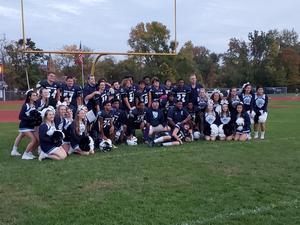 Mater Dei Prep, after fielding a JV team in Fall 2021, has announced plans to resume fielding a varsity football team and is planning a full schedule for the Fall 2022 season.
Mater Dei Prep, after not fielding a varsity football team last year, has announced its plans to resume fielding a varsity team and playing a full eight-game schedule for the Fall 2022 season.
Under head coach Taylor Groh, the Seraphs played a six-game junior varsity schedule last season, building a strong foundation for the future, according to Athletic Director Rich Buckheit.  "We're moving ahead as planned and scheduled,'' Buckheit said. "Coach Taylor Groh did a tremendous job with the team last year on the JV level. All of those guys will move up to the varsity level.''
Mater Dei Prep has Patriot Division games scheduled with Keyport, Keansburg and Point Pleasant Beach. The other games the Seraphs will play are to be announced.  "We're working with the Shore Conference to round out the schedule,'' Buckheit said.
Contact Rich Buckheit for more information:  rbuckheit@materdeiprep.org