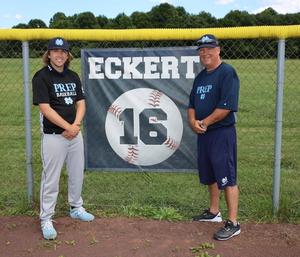 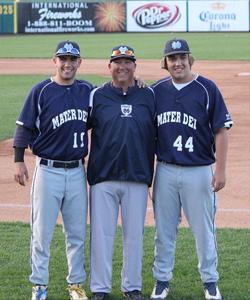 He served as Assistant Varsity Coach from 2007-2020 and was awarded Assistant Coach of the Year in 2014 by the Shore Conference Coaches Association.

Coach Eckert has an extensive Baseball resume that extends back to his childhood where he first developed a love for the game as a player for the Old Bridge Township Little League. At Cedar Ridge High School, Mike lettered three years and served as team captain for two years. He was all conference and all county catcher in 1983-84 and was the first player from his high school to play in the All-State All-Star game in Princeton, where he was named to 3rd team All-State in his senior year. His skills were also recognized by the Middlesex County American Legion Summer Baseball League as an All-Star Player for two consecutive years.

Coach Eckert continued his baseball career, playing four years of college ball for Coach Mike Fox at North Carolina Wesleyan College, where he graduated with a Bachelor of Arts in Criminal Justice. Under the leadership of Coach Fox, recently retired Head Coach from the University of North Carolina Chapel Hill, the team compiled a record of 158-35. Mike was named Captain for both his Junior and Senior years and was named Most Valuable Player of the ‘87 World Series 3rd Place Team as well as Male Scholar Athlete of the Year in his Senior year.

Following college, Eckert began his coaching career working alongside his College Coach, Mike Fox, and assisted in bringing the Wesleyan Team a championship title in the Division 3 World Series in 1989. Upon moving to Middletown, New Jersey, Coach Eckert expanded his coaching career and capabilities. He coached Middletown Twp. Little League for 19 years, and also was responsible for several All-Star teams of every age group. He coached twelve years for Middletown Travel Teams, bringing teams to Cooperstown and Aberdeen, MD, participating in weekly and weekend tournaments. Mike joined the Middletown Little League Board of Directors from 1995-2017.

As founder of the Sandlot Summer Baseball Camps, Coach Eckert grew the three-week Summer Camp program to accommodate up to 150 players. The camps’ culminating event was the Sandlot Memorial Weekend Baseball Tournament that eventually grew to having over 50 teams compete in one weekend! In his spare time over the past 20 years, Coach Eckert, also worked as a Private Instructor for hitting, pitching and catching.

When asked about his passion for coaching, Mike responded, “I love coaching because of being around the kids, just teaching kids the game of baseball. Academics, Baseball and Character are the ABC’s of life! I love the comradery that comes with the sport and Coaching. I teach my players to follow the mantra of CHAMPS, which represents: Coachable, Honor, Achievement, Mentor, Pride and Sportsmanship.”

Mike and his wife of 30 years, Dianne Ciasca-Eckert (MD ‘83), are committed and longstanding members to the Mater Dei Family. Their three boys, Mike (MD ’11), Matt (MD ‘14) and John (MD ‘20) all attended and graduated from Mater Dei. Through this, Coach Eckert was eventually able to combine his two passions of Baseball and Family as all three of his sons played, and he was able to coach their teams. When asked how he first became involved with coaching at Mater Dei in 2007, Coach Eckert stated, “My oldest son was a freshman and Pat asked me to coach. All my sons played for Mater Dei and I wanted to be a part of their experience.”

As he moves into the Head Coach role, Coach Eckert plans to continue and expand upon the program that he and former Head Coach Pat Riddell established, focusing on character and team building, skills, and love for the game. “Everybody’s ambition is always to win the division, but have the players perform at the highest level. My goal is to have each player put forth the best product.” When asked to summarize his coaching philosophy, Coach Eckert stated, “Have the kids take pride in what they’re doing.” What may appear to be a fairly simple statement to the average person, any coach would tell this is a monumental task. Coach Eckert, the Mater Dei Prep Community is proud and happy to have you working with our young athletes to be better both on and off the field!