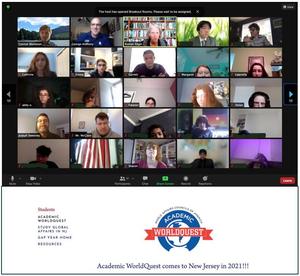 The teams competed by answering rounds of questions that test their knowledge of current affairs, world leaders, geography, recent history, international organizations, countries, regions, the world economy, culture, religion, and more. A full competition consists of 10 rounds of 10 questions (for a total of 100 questions); the winning team is the one with the highest number of right answers.

The Mater Dei Prep Sophomore team led the contest through the first two rounds, then competing round for round with Bio Tech High School. They tied for 3rd place with Leman Private School of New York on the last question. A tie break competition is scheduled for the afternoon of February 18th. The winner of that round will go on to the National Competition. The event was intense, but Mater Dei Prep competed with exceptional professionalism.

Freshman competitor, Garrett Nolan, stated, “On Saturday I had the opportunity of participating in a Globe Quest competition run by Roslyn Angel, a professor at the U.S. Naval Academy. We had many sections of questions ranging in topics like Fraying Alliances and The Uzbekistan Conflict. My section was the International Labor Organization, or I.L.O. Mater Dei’s Sophomore Team came in the top three and is moving on to the final competition in April. All in all, it was a great experience with my classmates and colleagues.”

Dylan Coleman, grade nine, stated, “This was our first attempt at a competition such as this one. I tried to assist with giving correct answers, especially in The Arab Spring Category, and to help calm my teammates down in this fast-paced environment.”

Sophomore, Emma DeBiase, remarked, “Even though we have to compete in the runoff (tie break), we still did a wonderful job. When some of us started to get concerned about our ranks, one of us would calm the others down. During our breaks, we took time to study the next topics, and take deep breaths because we were all nervous. For myself, I was terrified, but my teammates helped me to overcome my nerves. Thank you, Mr. Anthony for all of your help in preparing us.”

Margaret Fisher, who competed with the sophomore team, recalled her feelings on the day’s events.  “I think that I speak for all of us when I say that we had a lot of fun during this competition and are proud of ourselves. We were very nervous before the competition and definitely did not think we would do as well as we did. We were really strong in the first couple topics and as the competition went on, we struggled, but we picked ourselves back up and did not move from the top three places. We are ready and excited to compete in the runoff competition and are determined to win. Finally, thank you Mr. Anthony for giving us this opportunity.”

Eleanor Donohue, also a member of the sophomore team, replied, “My role in the competition was as a member of the Mater Dei Sophomore team. I worked with some of my friends which made the process a lot more fun and I'm glad I got to do it with them. The competition was very hard, but I am proud of how our group did, and I think we are going to do well in the runoff and hopefully advance to the next round. I studied the topics Great Decisions and Arab Springs, which were both very interesting. I found the articles fun to read. Learning about the Arab Springs taught me a lot about civil rights around the world and Great Decisions taught me so much on various topics. Being the only all-female group was very exciting and I think it also helped to motivate us. I have never heard of a competition like this, so I was glad to have the opportunity to participate.”

Gabriella Graham, grade 10, reflects on the experience and the outcomes. “I feel that we did amazing together. Margaret, Ellie, Emma, and I make a great team and really put our AP Human Geography skills to use. We separated the sections we needed to study so that way we could have more background knowledge on the topics. In the breakout rooms, we were all a bit nervous and didn't think we would make it into a tie for third place. When I saw that we were in first for the first few topics, I wasn't the only one shocked out of us four. Although, there were a few questions that we stumbled on and got right, we did do our best and hope to continue to persevere through this challenge. We had collectively decided to study two of the topics all together, since we had the two left-over between the four of us. I personally found my topics, ‘Looking to a Post-Pandemic Economy’ and ‘The U.S. Foreign Service in the 21st Century’, very intriguing, and I found myself getting roped into the articles. Like every team, we had our small disagreements. There were a few questions of which I would say one answer and someone else would say another. This opportunity definitely was something that had brought us closer together to put our brains together as one. When we found out we were the only all-female team in the competition, we knew we wanted to place in the top three, ideally first, but it all fell into place anyway. Now, I believe I can speak for all of us when I say, we are looking forward to the runoff and hope that we can come out successful. We also would like to thank Mr. Anthony for giving us this opportunity to participate in a challenge between multiple schools in New Jersey and a few in New York”

George Anthony Director of The Global Institute at Mater Dei Prep commented, “This competition provided a new avenue to highlight and promote our programs. I thank Debra Serafin for leading us to this competition and Michael Bonelli for his astute attention to detail in teaching The AP Human Geography class, which directly assisted the Sophomore Team to gaining such a high standing. The Global Institute will explore other projects with The World Quest Organization as we continue to build partnerships that will provide our students with the knowledge and tools to foster better and stronger communities.”