From Mater Dei to Broadway...and Back! 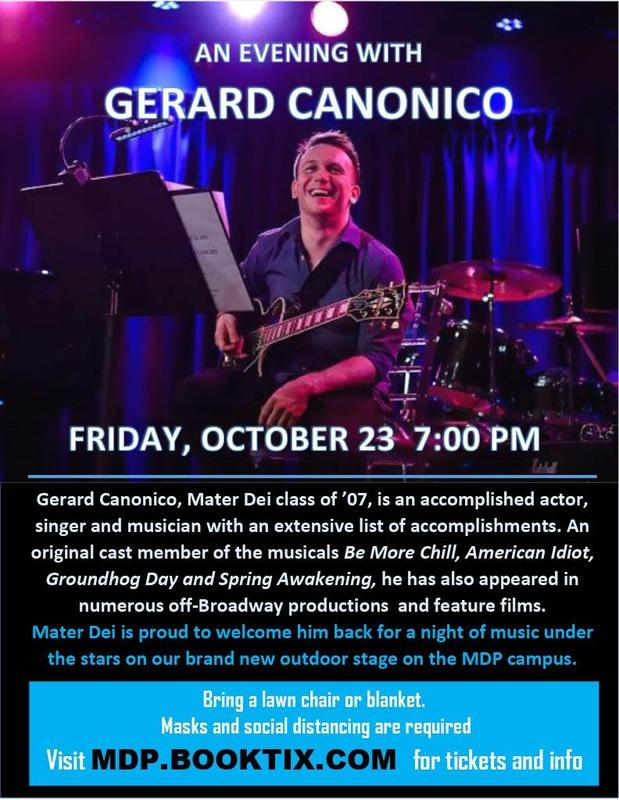 Grab your beach chairs and blankets and enjoy a night of beautiful music under the stars!

Gerard, a 2007 graduate of Mater Dei Prep and former Seraph Player, is a NYC based professional actor, singer, and musician with an extensive list of accomplishments.  An original cast member of the musicals Be More Chill, American Idiot, Groundhog Day, and Spring Awakening, he has also appeared in numerous Off-Broadway productions, including Dear Evan Hansen, and multiple feature films.

"We are so excited to have Gerard back with us. He is an amazingly talented young man, and such a wonderful example for our students interested in pursuing a career in performing," said Mrs. Dwyer, the Director of Performing Arts at Mater Dei.

Tickets are $30 for adults and $20 for students/seniors and can be purchased by credit card at MDP.BOOKTIX.COM.  Tickets may also be purchased at the show by cash only.

Social distancing rules will be in effect and masks must be worn.  Light refreshments will be for sale to support the Mater Dei Prep Seraph Players and Performing Arts programs.