Multi-Stakeholder Hearing: Chiara Del Cogliano Attends Accelerating the Realization of Gender Equality and Empowerment of all Women and Girls Virtually 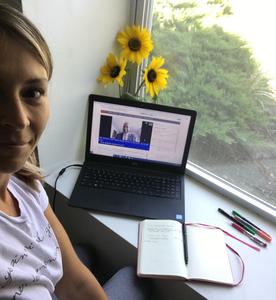 Mater Dei Prep (MDP) educator, Chiara Del Cogliano had the honor of attending as a Pathways To Peace delegate at the Multi-Stakeholder Hearing: Accelerating the Realization of Gender Equality and Empowerment of all Women and Girls. George Anthony, Head of the Mater Dei Prep Global Leaders Program and UN Pathways To Peace UN Primary Representative appointed Chiara as a High-Level stakeholder. Mr. Anthony expressed how “Chiara has demonstrated global proficiency in previous UN meetings and I look forward to her bringing that commitment to Women’s Leadership Initiatives here at MDP.” This specific event was held virtually by the United Nations on July 21st, 2020 and many were in attendance to participate. Numerous important voices described changes happening at a governmental and social level in order to implement the Beijing Declaration and Platform for Action, as well as the gender-responsive implementation of the 2030 Agenda for Sustainable Development.

Chiara said, “under the hashtag #generationequality we can find online ideas and resources linked to this conference.” There were various topics Chiara was able to listen in and weigh in on, all creating an open forum for expressing perspectives and opinions. One of the first key topics Chiara was involved in was education and how every young girl and every woman should have the right to access proper education in order to face the challenges of life. Chiara was also a part of conversations revolving around climate change and the influences it has on our generations, private sector occupations, and the opportunity it has for women.

She expressed how her stance on the perspective of women in society by all needs to be discussed more. Chiara says, “inviting all groups of people, specifically men and young boys, to listen and participate actively in a conversation of gender equality will begin a revolution of continued respect and appreciation.”

“Women are natural communicators”, Chiara says, “they are creative, they are courageous, they have innate problem-solving skills, show leadership skills, have a cultural impact, and ultimately make a difference.” The conference concentrated on women and how we all need to invest, protect, educate, guard, and create space for women. “Women are coming for it”, Chiara said. During the conference Chiara expressed “we as women want our voices to be heard because we have ideas we want to implement because we don’t want to compromise fitting in the patriarchal scheme, because we don’t want to encounter disadvantages when we embrace an entrepreneurial path, because we want to uplift our sisters, mothers, daughters, friends and lead the life we all deserve. Together we can.”