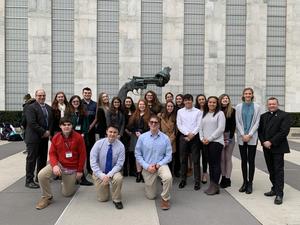 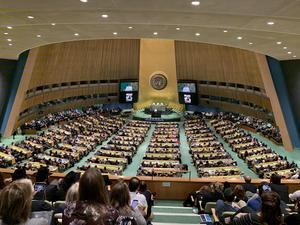 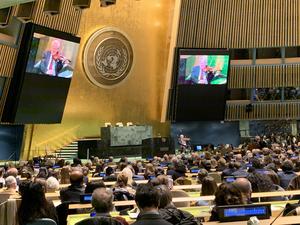 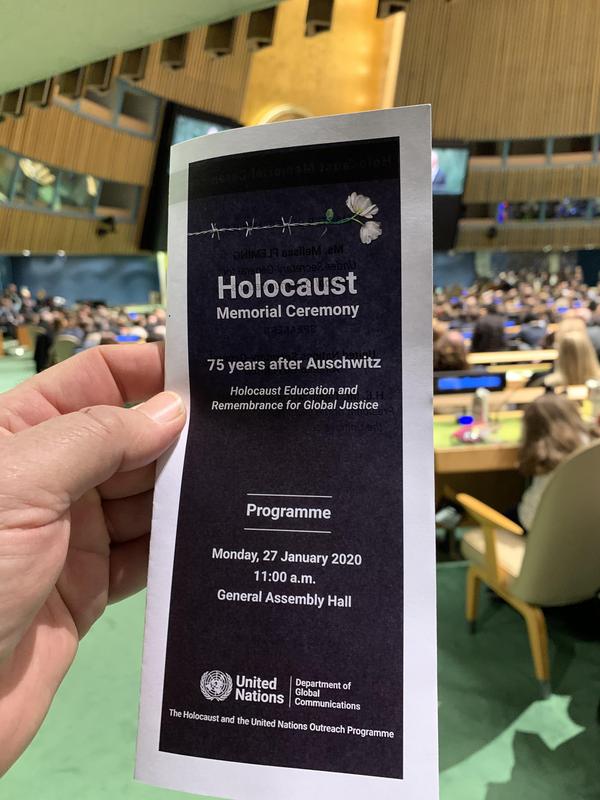 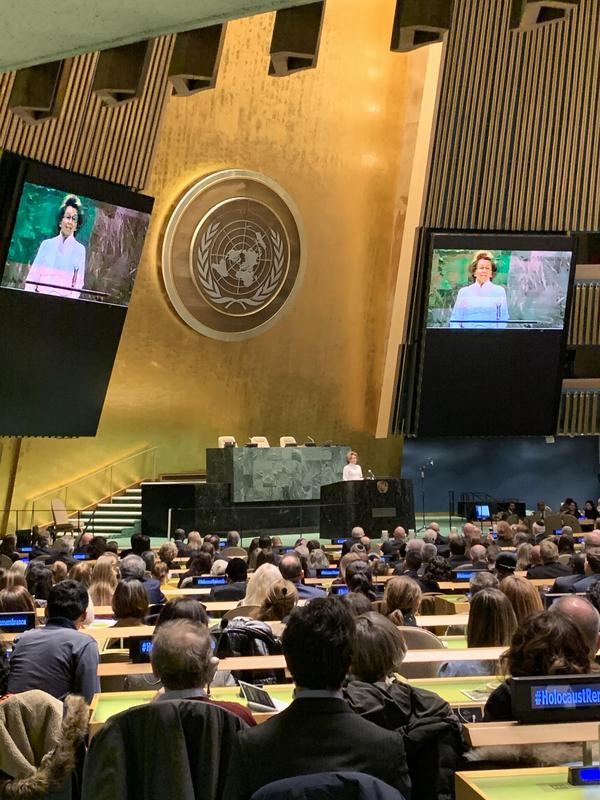 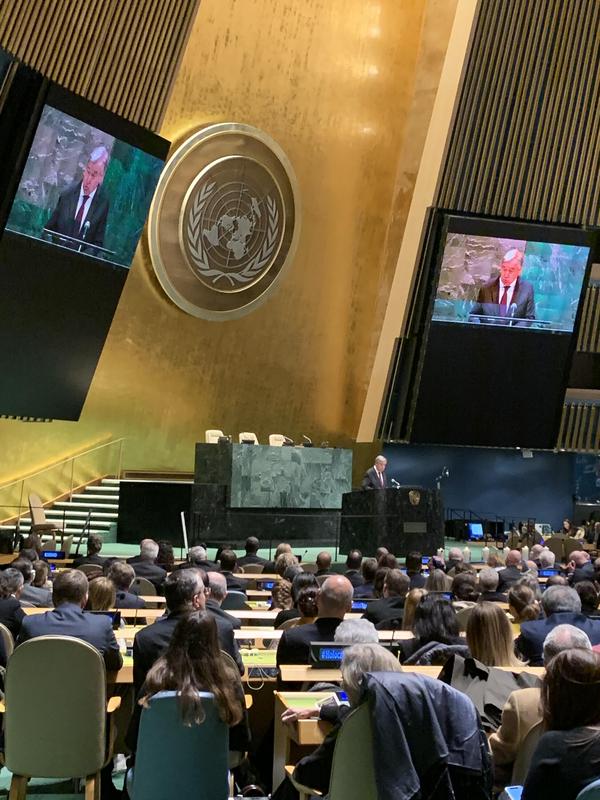 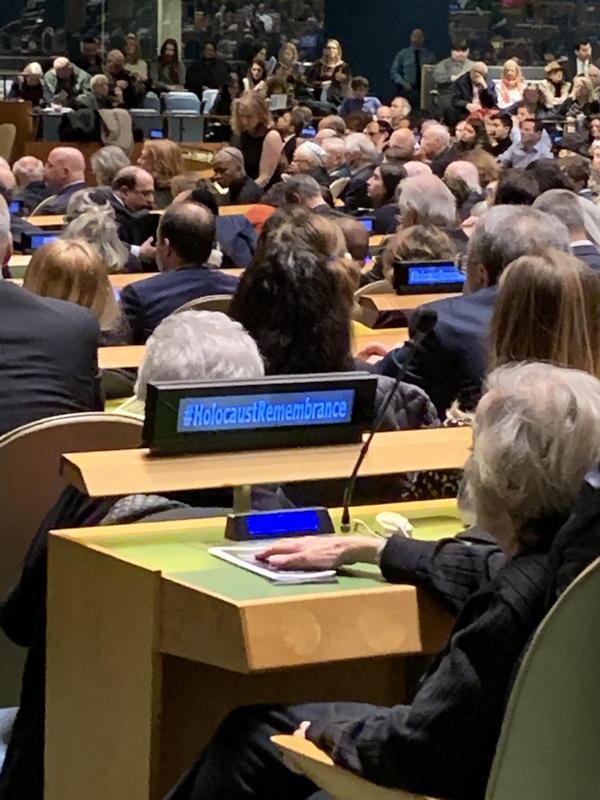 The ceremony, taking place 75 years to the day of the liberation by the Soviet forces of Auschwitz Birkenau Nazi German concentration and extermination camp (1940-1945), was hosted by Ms. Melissa Fleming, United Nations Under-Secretary-General for Global Communications. Invited speakers included the United Nations Secretary-General António Guterres, the President of the seventy-fourth session of the United Nations General Assembly, the Permanent Representatives of Germany, Israel and the United States to the United Nations, Mr. Castro Wesamba, Chief of Office, Office on Prevention of Genocide and the Responsibility to Protect, and Mr. Dan Pavel Doghi, Senior Adviser on Roma and Sinti Issues, OSCE/ODIHR. Holocaust survivors Mr. Shraga Milstein and Ms. Irene Shashar shared their testimonies. Judge Theodor Meron, who served as the President of the United Nations International Residual Mechanism for Criminal Tribunals, delivered the keynote speech. Cantor Shulem Lemmer recited the memorial prayers and Mr. Itzhak Perlman delivered a musical contribution.

“Seventy-five years to the day of Auschwitz Birkenau being liberated by the Soviets, the United Nations hosted a memorial service. In the name of peace especially in matters involving anti-Semitism, survivors told their stories. Itzhak Perlman joined the stage, giving a somber presentation of a violin sonata with heavy Israeli influence. A testament to what he could accomplish after surviving the war. Another speaker joined the floor and gave a firsthand account of what surviving Nazi occupation in Poland was like for a young girl. Her moving story was followed by a talk of hate crimes towards the Roma people during Hitler’s reign. All of the talks were very emotionally moving, painting vivid pictures of what life would have been like to live in such persecuted conditions.”

“Denouncing anti-Semitism is always beneficial and an important step towards peace. However, anti-Semitism is once again on the rise. To ensure the safety of all Jewish people, steps must be taken outside of voicing opinions. Legislation and government officials must act in support of the Jewish people and protect them from danger. Laws must be enforced to prevent people from performing any hateful crimes against them. Our youth must be educated about the despicable actions against the Jewish people to inform them of the evil they should avoid. Irene Shashar was a prime example of someone effected by Hitler’s inaccurate and despicable message. The Nazi’s caused her to lose her father and her home. Her mother risked her life to help Irene escape from the Nazi’s so she could have a chance at life. Irene’s profound message taught that we should not let her mother’s sacrifice and the sacrifice of other Jews go to waste. We should continue to protect minority groups so that Hitler’s hate will never prevail. I learned that although we cannot change history, we can learn from it. We can use our past to inform the next generations, to prevent any similar situations from occurring, and to ensure a better future.”

“We as a whole need to use more than words to help spread awareness about the Holocaust to make sure that a genocide like that will not happen again. Irene Shashar and her mother had to escape and in order to escape the Holocaust, they had to go through several harsh conditions. They had to travel through sewers and harsher conditions. If I could put myself in her shoes, I would be able to understand very little. The way that she told us what she went through, caused me to feel even more saddened.”

“Yesterday was the 75th anniversary of the liberation of Auschwitz and the UN held a conference to commemorate it. Some of the speakers included UN representatives, survivors, and UN officials. There was one speaker, a survivor, who gave a disturbing amount of insight into life under the Nazis. She was two years old living in the ghetto. Her dad was murdered and spent much of the war in hiding. There was also a violinist. The song he played resonated with sadness and despair. The rest of the speeches were generic in my opinion, but the violinist and the survivor stuck in my mind. The lengths that woman went to in order to survive and remember she was only a toddler. It’s made even more depressing when you remember millions of other people did the same things. It was like rats living in the city trying to stay out of site trying to survive. If they were caught, they die. We must make sure nothing like this every happens again.”

“Yesterday, I had the opportunity to be a part of the 75th anniversary of the Holocaust Remembrance at the United Nations. It was a very touching experience listening to all the speakers. One speaker that stood out to me the most was Irene Shashar, a survivor of the Holocaust. She was just a toddler in the Holocaust and her story was devastating, but inspiring. Many of the speakers stressed that the Holocaust is something that we should never forget, and that each generation should continue to tell the stories. We need to make sure that that evil never takes power ever again.”

“Yesterday's trip was a once-in-a-lifetime opportunity, we had the opportunity to witness a survivor of the Holocaust tell her story.  We are the last generation to have such a special and important opportunity and I'm glad that I got to experience it.”

“The main point of this conference was to never forget about the Holocaust. They do this so that the people can keep their memory alive. The ceremony, taking place 75 years to the day of the liberation by the Soviet forces of Auschwitz Birkenau Nazi German concentration and extermination camp, it was hosted by Ms. Melissa Fleming. The event included remarks by the United Nations António Guterres, the President of the seventy-fourth session of the United Nations General Assembly, the Permanent Representatives of Germany, Israel, Russia and the United States to the United Nations, and Mr. Dan Pavel Doghi, Chief of the CPRSI, Senior Adviser on Roma and Sinti Issues. Holocaust survivors Mr. Shraga Milstein and Ms. Irene Shashar shared their testimonies.”

“On January 27,2020 we attended the Holocaust Remembrance Conference in which we witnessed multiple powerful speakers talk about how we cannot write the Holocaust off as something that happened in history. We need to educate young children on what happened and how we still continue to face the effects of it today. Facing many anti-Semitic crimes still today and what we can do to stop that. One survivor, Irene Shashar, talked about how eternally grateful she is to her mother for taking her and wading through dirty sewer water to save them. She made it out and started her own family. One prominent thing throughout her speech was that Hitler did not win. She was able to make it start her own family, children, grandchildren etc. Hitler did not win.”

“The Holocaust survivor told us that when life is tough we have to push through. We can prevent this by being kind to others, and teaching this to kids. Even though, it happened 75 years ago, we have to make sure it doesn’t happen again."

George S. Anthony, Head of The Global Leaders at MDP

“We are losing Holocaust survivors to time. Our students must understand it is their turn to carry the memory and message forward “Never Forget…Never”. They can and should carry the words of the survivors in their hearts and through their actions. The Global Leaders Program will continue to support Holocaust education and Genocide awareness throughout the year.”