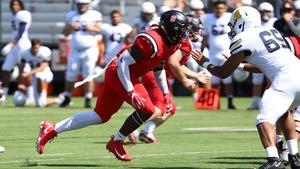 Check out what alumnus Tom Olausen '18 is up to as a student-athlete at Rensselaer Polytechnic Institute! Awesome accomplishment Tom!
"The Liberty League has announced its year-end award winners from football and Rensselaer Polytechnic Institute (RPI) student-athlete Tom Olausen of Middletown and Mater Dei Prep High School is among those to have earned the honor.
Olausen was named an All-Liberty League Second Team member. The offensive line center started all 10 games with the team averaging 339.0 yards per game, including 218.3 passing.
Rensselaer, which is coached by Ralph Isernia, is 6-4 with one game remaining this Saturday. The Engineers were selected to play in the ECAC James Lynah Bowl and will travel to Grove City College (8-2) for the season finale on Saturday. It will be the first meeting between the two schools.
Founded in 1824, Rensselaer Polytechnic Institute is America’s oldest technological research university. For nearly two centuries, the Institute has been a driving force behind breakthroughs in engineering and science in virtually every arena-from transportation and infrastructure to business, medicine, outer space, and cyberspace."
Content from the article below:
https://themonmouthjournal.com/tom-olausen-named-to-allliberty-league-p8564-73.htm?fbclid=IwAR2DWhlb-Ianydb70gr2D1-j-Fea3iM7n1H2Y4Bttsk-tUoYQkTQgE8r8PE