Global Leaders: “Listening to the Survivors of Religious Persecution: Call for Religious Freedom” 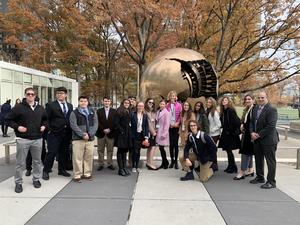 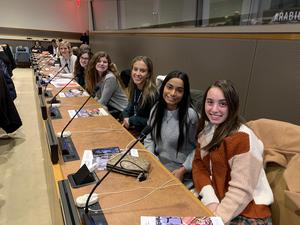 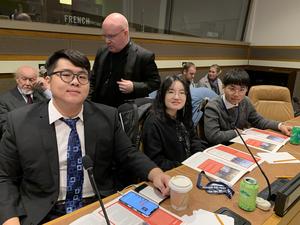 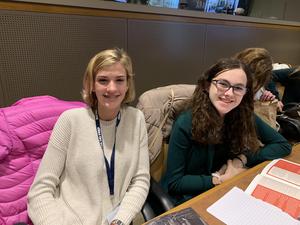 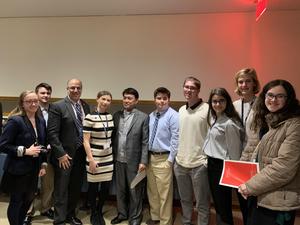 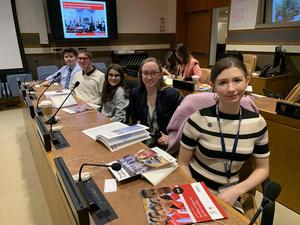 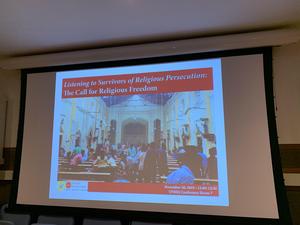 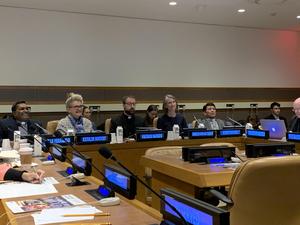 On November 20, 2019 the Mater Dei Prep Global Leaders attended a conference focusing on the religious persecution of Christians in Africa and Asia. The conference, led by the Holy See and backed by ACN United States, was a poignant look at the horrible treatment of Christians overseas, and spotlighted survivors of religious persecution from Pakistan, the Philippines, and Sri Lanka.

The panel was led by Fredrik Hansen, the Chargé d’affaires a.i. Permanent Observer Mission of the Holy See to the United Nations. He began the conference by providing facts relating to worldwide religious persecution; namely that Christians are the world’s most persecuted religious group and that 11 Christians are killed every day. He rebuked the practice of refusing to name Christians as victims (instead using phrases such as “Easter-Worshippers”) and called for reform in the process of protection. Other notable speakers were Mr. Edward Clancy, director of ACN United States, and the Honorable Ambassadors Katalin Bogyay of Hungary and Cherith Norman Chalet of the United States.

The conference’s three keynote speakers spoke of their own personal experiences with religious persecution, and their hope for a brighter and safer future for their communities. Father Neville Fernando, TOR, recounted the infamous Sri Lanka Easter Terrorist Bombings describing the horror he felt walking into the bombed cathedral minutes after the bomb went off. His work in helping the victims acted as his mantra of hope. Sister Ghazia Akbar, FSP, spoke of the systematized discrimination Christians face in Pakistan, and Father Romeo Saniel, OMI, of the Philippines described his personal experience with persecution. Saniel was nearly killed during a mass when two men walked in and placed a gun at the back of his head. He only survived the ordeal because the gun jammed. Since that event seventeen years ago, he laments that little has changed in the political and social atmosphere, with priests being abducted, tortured, and killed frequently.

Regardless of the atrocities these three keynote speakers described, ended on a message of hope for a future in which religious persecution no longer exists, and entreated us to work for reform at every level. Attendees left the room with a renewed purpose and desire to help end the discrimination and systematized violence, inspired by the hopeful attitudes of the speakers.

Mater Dei Prep students respond to the event below:

Ellie Donohue (MDP ‘23) Personally, what stood out to me at the conference was the speaker who was a priest in the Philippines. I thought about how strong he was to keep fighting after a gun was held to his head, and he presented himself so well. He was personally inspiring to me, and he made me think about how I would react to something like that. I admired how much faith and courage he had to forgive the two boys and move on, and I thought he was one of the best speakers at the conference. The other speakers were great as well, and I thought about how much they inspired me with their strength, faith, and resilience in the faith of persecution.

Yesterday, I was moved by the Religious Persecution Conference. Listening to the speakers helped me understand more of what is happening to Christians around the world and made me wonder what I could do to help. As a Christian who lives in the United States, I never had encounters where I was judged because of my religion. I feel very privileged that I can go to a Catholic school where I can practice my faith in a safe space.

Devon Perrotta (MDP ‘21) One speaker that stood out to me was Father Romeo Saniel. He told the story of the bombing of his Church. I couldn't believe that people could have such hate in their hearts that they would destroy a place that is sacred to people. He told another story about when two young boys put a gun to the back of his head as he was walking through the streets. He heard the click of the gun and fortunately, it got jammed. He said that he knew it was God that saved him that day. Christians are continuously persecuted for their faith and it is important to remember that God is always with you, just like what Father Romeo said.

Sarah Wickham (MDP ‘21) was also impacted by Father Saniel :Apostolic Administrator Philippines, “Hearing Msgr. Romeo Saniel speak about the violence that went on in his country and being completely open with his words just gave a real life, up close look on just how dark the world has become and that’s something I think we need to all be more knowledgeable about. It made me realize that the work we do in this program makes an impact.”

Chen Chen (MDP ‘21) is an International student from China who is Catholic as well as many in her town. She was deeply moved by the speakers vivid accounts of persecution and perseverance. She said, "I’m Catholic, and my parents are too. There is a Catholic Church in Chengdu, the city where I live in China, and the Catholic religion is accepted there. I've heard people say there are no Bibles sold online in China. I never realized that since we usually received Bibles from the church. Considering I’m Chinese and my family is Catholic, is it nice to know that people are respectful of my religion in China and here."

George Anthony- Head of the Global Leaders and Primary UN Representative Pathways To Peace stated “This Conference provided a chilling lens to the extent hate indoctrination in the hands of corrupt leaders and individuals can manipulate human beings to move away from religious precepts of peace, hope and solace and bring destruction into the lives of others”

Lucy Jackson (MDP ‘23) said “I was really inspired by Father Neville’s story it really showed me that there is a lot of hate in the world and a lot of innocent people get hurt out of other people’s pure hatred. His stories really opened my eyes and made me realize that everyone plays a part in the world and that each person has the ability to do something to impact the world, whether it is something bad or good we can all do something to change the world, big or small.”

For more information on The Global Leaders please email George Anthony at ganthony@materdeiprep.org