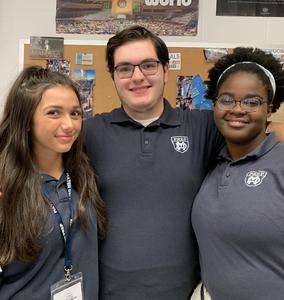 This past summer Alexis Lombardo and Chika Efobi were selected by Rotary International to attend their International renowned Youth Leadership Institute held over 3 days at Monmouth University. Their selection was based on their academic and community service as well as their role as officers in the Global Leaders Program. Joseph Stanton last years Rotary Selection was asked to return as a trainor!

Read each of their stories below:
"From June 29th-July 2nd I was at Monmouth University at Rotary Youth Leadership Awards.
In my time there, I learned about an assortment of different leadership types and which ones were best implemented depending on the current situation(s); it was my knowledge of being a "backseat" leader (one who knows when to oversee these group and let each member work for themselves) that appointed me as team leader.
Each day held new exercises on direction that I'm very glad to have been trained on, especially going into this school year with the United Nations' conferences and projects.
All four days had been incredibly impactful and were significant opportunities for recognition of not only how powerful each individual leader was, but how powerful we as the Youth are when we work together. We empowered each other to work harder in accomplishing our goals and had devised a legitimate plan to end world hunger.
All-in-all, it was a transformative experience with friendships that will last a lifetime. I was particularly thankful for the multiple opportunities I had to represent my team and Mr. George Anthony with my ideas and views and to have Mr. Dave Gowell himself tell me how he liked my readiness to express myself right from day one. I also hope to implement what I've learned in my trips to the UN for the betterment of my community, and eventually the world."
-Chika Efobi


"This past summer, I had the amazing opportunity to go to Monmouth University for my second year at RYLA. In 2018, I was selected to attend the program as one of the students, known as “leaders”. During those four days at the program, I learned valuable skills such as team building, trust, and public speaking. I was able to select a sort of club called a “guild” at the program. I chose the Public Speaking Guild because of my role in the Global Leaders Institute at Mater Dei Prep. Not only did I learn the valuable skills such as how to prepare a speech and how to captivate an audience, I learned how to work with a team of strangers to prepare one large presentation. By the end of those four days, I was comfortable enough to go up on stage and lead the closing ceremony with those I now call my closest friends. I knew that after those four days, I had to go back to become a counselor, and sure enough, I did. Out of the seventy candidates that showed up to training, I was selected as one of the 24 support counselors to make RYLA 2019 the best it could be. I learned vital skills such as building rapport with others, how to speak comfortably with anyone in any situation, and I learned how to lead a team. I was going to be the person that most of the students turned to as I was closest in age to them. In 2019, I was able to apply these skills to those students whose shoes I was in just a year ago. I supported them in their uncertainties and concerns, and I cheered them on during all of the team building events. I can now call them my second family. This program has changed me for the better, and it certainly helps my connection to with the Global Leaders Institute. With all the public speaking skills I’ve learned, and all the skills I’ve learned to build rapport with others, I can safely say that I now am well on my way to becoming a stronger and better leader in my community and in the world."
-Joey Stanton

"I had the honor of being selected to attend a RYLA this summer. I went into these four days being completely skeptical as to what was to come. My experience at RYLA was lifechanging. one thing I gained was the ability to believe in my leadership. I was supported by trainers and counselors with international experience. This was a perfect fit because my work as an officer in the Global Leaders program puts me in situations on a global and local scale where I can impact my community on a positive scale. I enjoy this work because I get to put an array of my talents whether its graphic design, public speaking, performing fashion and leadership into projects that create positive change in the world."
-Alexis Lombardo